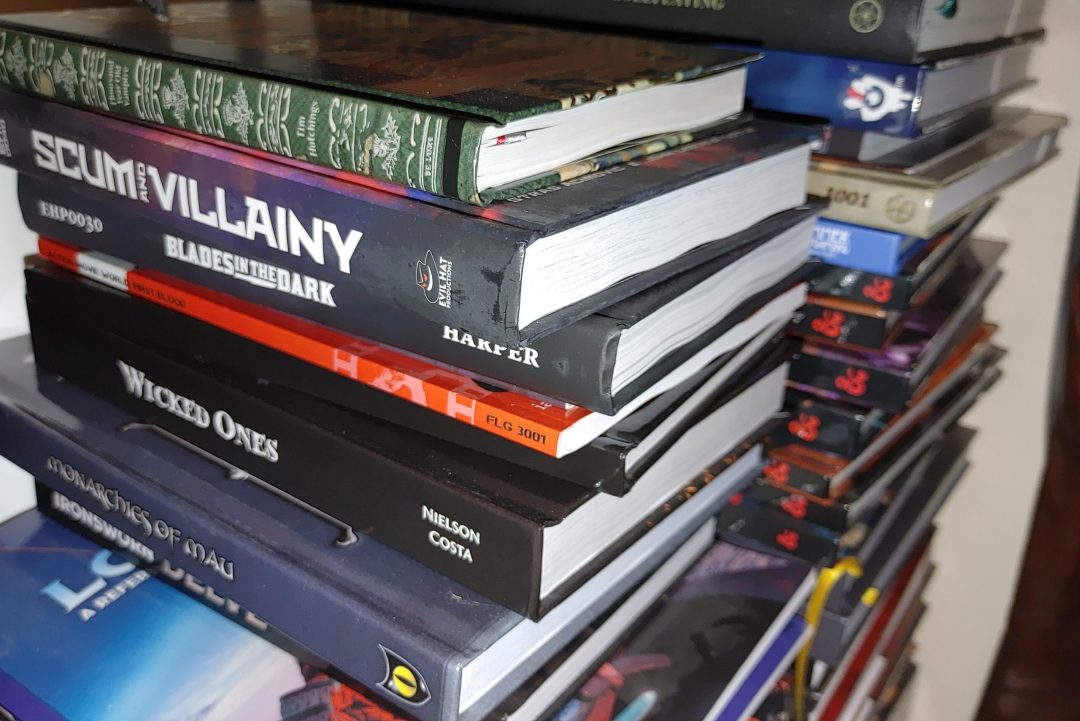 Let’s make this clear right up front: I’m no fan of “crunchy” tabletop roleplaying games. I have a ton of them, mostly older games in my collection, but they aren’t my favorites.

In the last year or so, I have discovered “Powered by the Apocalypse”-style games, which really got me focused on “rules-lite” TTRPG systems. They weren’t the first rules-lite games I’ve ever owned, as I’ve been collecting games since the 1980’s, but PtbA games really influenced my decision to avoid crunchy games as much as possible.

Unfortunately, I have found myself encountering TTRPG after TTRPG in my collection, that are crunchy as Hell. Why? Because I’m an idiot, and chose to play them for my solo tabletop roleplaying actual-play podcast, “Ronin Roleplaying“.

Okay, no… That doesn’t really make me an idiot, to be fair. These are games I own, and wanted to try out (most of them I’ve owned for years, but have never played), thus why they are being broken out for the podcast. But I’m getting pretty fed up with the Crunch already, and I’m only on Season 2 of the podcast!

What had brought this to a head? Well, one game in particular: “Fireborn“. Now don’t get me wrong, there is nothing particularly wrong with this game, in fact it look like a lot of fun. That said, when I’m reading the rules, and my eyes start to cross from the system mechanics, that’s when I know I’m perhaps a bit over my depth on this one!

Luckily, I’m only playing each game for a month in Season 2, before switching off to another title, but even so… I tell you, this is hard!

Now then, once I get through this season, I have given myself a bit of a reward. Starting with Season 3 (coming out in 2023, mind you), I will only be playing games I absolutely want to play. I won’t be requiring myself to add in older games from my collection, simply because I haven’t played them before. Well, for the most part, anyway. Basically, I will be playing a lot more modern games, rules-lite games, and just plain fun games.

I do see the appeal for some roleplayers, when it comes to crunchy-style games. They want their games to be in-depth, comprehensive, and cover most every situation with a rule, so there is no question as to how to handle it. “Pathfinder”, I’m looking squarely at you.

I, on the other hand, am squarely on the Old School Revival side of this particular fence. In my opinion, systems that feature more stripped-down rules, or give the game-master more room to make rulings where the system doesn’t cover a situation, are way more fun to play, in the long run. Can they be more difficult for the GM sometimes? Sure, but they also tend towards faster, leaner gameplay.

Now then, D&D 5e isn’t exactly crunchy, but it is far from rules-lite, as well. I would say it rests in a rather nebulous zone of TTRPGs, where they feature way too many rules, but those rules are pretty easy to assimilate and use at the table. This still leave gamers looking stuff up all the time, especially when they are new to the game, and this might possibly be the worst thing about 5e overall.

Too many rules, and too much time spent figuring out how it all works at the table.

Meanwhile, I present to you “Old School Essentials”. This OSR fantasy game is basically the “Basic/Expert” edition of D&D from 1981, with the rules rewritten and sectioned off into proper formatting. It is way easier to use than any other edition of D&D I have ever owned, and the rules are light, making for quick and easy play at the table. It still has the feel of D&D (obviously), without the bloated feel of Fifth Edition.

The thing is, I’ve played way too many games, and after all of these years, I simply cannot fathom why people still insist upon playing crunchy TTRPGs. It is almost as if some developers make their games to be difficult to understand, simply for the Hell of it. Either they fill their game with rules for every situation, or include multiple systems and subsystems, many of which conflict with each other. Different dice, to do different things… It all adds up to confusion and conflict.

Give me a simple 2d6 to cover all situations, and I’m a happy camper.