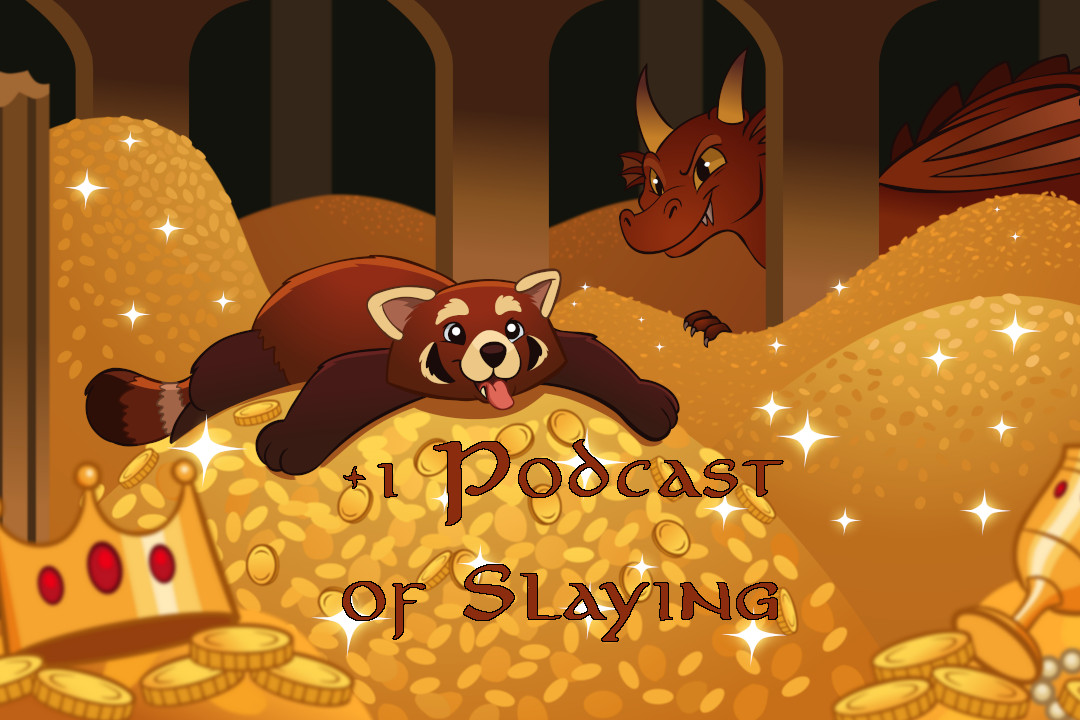 So I have a problem. Well, it isn’t really so much of a problem as it is… more of, I have assets that aren’t being used right not, and that bothers me.

Nevertheless, let’s be a bit reductive, and just call it a “problem” for now. Anyway, what is this “problem”? Well, I have a perfectly good podcast that is sitting on hiatus right now, and has been since 2020, that could better serve the website if it were rebooted. I also have a freshly-renovated office/podcasting studio, that I’m just itching to use!

That podcast is “+1 Podcast of Slaying”, my old roleplaying-focused podcast. It went on hiatus before my heart surgery, and stayed that way so I could focus on the bigger projects, leaving more time to recover. I would say that I am well and truly recovered now, “Loot Mechanics” is rolling along just fine, and I will be a year ahead (at least) with my solo roleplaying actual-play podcast by the end of this year.

I think I have the time and energy to throw together something for another project.

Here’s what I had in mind: Starting up a cooperative tabletop roleplaying group, with no GameMaster. We would use an Oracle (there are many online one can employ for this purpose), and together the group would decide how the story went. As for the group, I envision this being done online, likely over Discord, but I might swing for a dedicated voice service, if necessary. I did consider using a Virtual TableTop (VTT) service like Roll20, but those are designed around having a GameMaster, and that won’t work with what I had in mind here.

As for the group itself, that would depend upon those interested in the project, and frankly, who bothers to show up. I’m thinking this actual-play would be run in a modified “West Marches”-style. Every session would be a self-contained adventure, with the next session always starting again in the base city for the overall group. Those interested in taking part would be vetted prior to playing, have characters already made in advance, and confirmed to have equipment that sounds good over voice comms, and in good working order.

People that actually want to be on an actual-play podcast, obviously, would be the first concern. People familiar with “West Marches” adventures in general, and experienced roleplayers would also be a must. People who can actually function without miniatures and VTTs, in a “Theater of the Mind”-style game would be required, of course.

Anyway, how would this differ from the old group actual-play podcast “Knights of the Tabletop”, that graced this website for a little over a year? Simple: No GameMaster. Obviously, I would have to arrange this shindig, do whatever editing was required (I suspect it would be on the light side, and will explain shortly), and host it all on my site, but I would be just another player, when it comes to actual show involvement. It would be nice to step into a primary role in one of these things.

As for editing, I would like this to be more representative of a real tabletop roleplaying group, warts and all, as opposed to to the highly-edited and polished actual-plays that litter the podcasting landscape. I would mostly try to keep any awkward pauses trimmed out, remove breaks if needed, and so on.

Now then, how can I justify being a player in this show, when “West Marches” games generally don’t allow you to keep coming back for every session? Usually players have to take breaks, maybe only playing every-other session at most, allowing more people to play the game.

Well, unlike most “West Marches” games, there’s now GM involved. As I’m hosting this thing, doesn’t that mean I have a role on that show each episode, if only as the host? I could certainly stand aside in a given session, if there were a lot of players who showed up, or there were other reasons why I might do so. I would just come in, introduce the team, then leave the players to do their thing.

My mic has a handy “Mute” button, you know.

Anyway, there are a few problems with this reboot idea.

First of all, what should we play? Personally, I think it should be a game that is easy to learn, easy to play, and normally designed to have very little prep, if a GM is normally involved. That basically says it will be a “Powered by the Apocalypse” game, but which one? “Dungeon World” would seem to be the obvious choice, as it is the most similar to “Dungeons & Dragons” (something very important to many players), but there are issues with that game, so this would have to be something we all discuss. But I suspect it will be a fantasy game.

Next, how do we let this play out? Since there is no GameMaster, how do we portray Foes and Non-Player Characters, for example? Normally that is something GMs would do in a game, and in a normal cooperative TTRPG session those groups likely just figure it out on their own. But in an actual-play podcast, someone has to do this, right? Maybe the Host (me) gets stuck with this duty? If so, why aren’t I just GameMastering the damn thing, then? Been there, done that, literally have the fucking t-shirt, and I really don’t want to repeat that experience again!

Finally, setting the variables for the show could be a pain in the ass. Coming up with group rules, determining when we will play, how many people are allowed to play on a given session, how long should these sessions go, and so forth. This makes things really sticky for me, because ultimately – even if it is a cooperative game – it is my show. I might not be the GameMaster, but I am the Host and Producer. Ultimately, I have to set some parameters for the show, and expectations for the group.

Basically, there are a lot of issues that would need to be worked out (and likely a bunch more I can’t think of right now), before we could bring this project into being. That said, I do think that there is merit to the idea, and it is worth giving a shot.

That all said, why not take a simpler approach? Why not My Lovely Bride™ and I sit down and tackle this together, just the two of us? We have the studio, the gear, and I know she and I would work out great together, so why not just do that?

This was my first thought on the subject, I’m not gonna lie. No internet issues to worry about, less potential for “problem players”, and so on… This would seem like an ideal resolution to the problem, really. But (and it’s a big But) my sweetie won’t be a part of an actual-play podcast ever again. She also literally has that t-shirt, and doesn’t want to be involved with any project of that sort ever again.

Frankly, I don’t blame her. I know this would obviously be different, but still, I won’t pressure her into taking part in a game that she isn’t fully on-board to play, or join a podcast she doesn’t really want to participate in. Unless something were to radically change on that front (unlikely), this simply won’t be happening.

Anyway, this idea really appeals to me, but I also don’t want to get burned out, which could certainly happen. This is why I envision ourselves playing for a few hours, perhaps once or twice a month at most. The show itself would probably work better in a longform format, as opposed to edited into smaller episodes, so the show would probably come out monthly. That isn’t very often for a podcast, but considering the other issues involved here, that might be the best choice. Of course, all things could change, in time.

Is this concept worth pushing forward with? If I want it to launch at the start of 2023 (which I would), that means I’d need to get going with it pretty soon, though.